Helping Hands Network Center and Hubbard House have spent the summer working with the youth who live in Eureka Garden to provide them with skills and knowledge to help end the violence in their community.

Hubbard House was invited to participate in this year’s Helping Hands summer camp, which runs from June 20 – Aug. 12, to teach youth how to identify emotions, deal with anger, alternatives to violence and most importantly respect themselves and others. Typically these lessons are taught as part of Hubbard House’s primary prevention program, W.A.V.E. (Working Against Violence Every Day, Everywhere, Every Time).

“Recognizing that there is consistent and extreme violence in this particular community, we are hoping that by showing these children alternatives to violence and providing skills for conflict resolution we’re helping them to avoid violence in their personal lives,” said Laine Reinecke-Clayton, Hubbard House Community Education Manager.

The 10-session curriculum Hubbard House taught at the summer camp ended today with a wrap-up party for the children. The children played a BINGO game reviewing all the concepts they’ve learned about ending violence, received a certificate and added their name and handprints to a banner pledging to work against violence in their community. The banner will be displayed in the Eureka Garden community center to serve as a reminder that everyone can do their part to stop the violence.

Around 35 youth, ages six to 15, participated in the camp.

ABOUT HELPING HANDS NETWORK CENTER: Helping Hands Neighborhood Network Center, Inc. was founded in 2008. Its mission is to enhance the quality of life for the residents of HUD subsidized apartment communities and their surrounding neighborhoods through creative programming, access to social services and the resources necessary – both material and human – that will result in increased employment/entrepreneurial opportunities, consistent academic success, increased health and well being and positive social/community interactions. 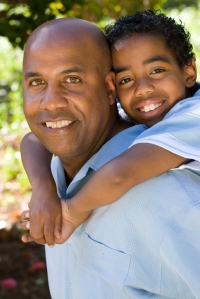 What do Dwayne “The Rock” Johnson, Vin Diesel, Daniel Criag and Chris Hemsworth all have in common?  They are all actors portrayed in movies that shape their audience’s beliefs of what a “real” man is expected to look and act like. These actors, along with many others, represent what society views the male to be: masculine, confident, strong and fearless.

But what about outside of the movie screen? Regardless of what society thinks men should be, there is a reality that is dismissed. Although men are physically strong, they are still capable of being victims of domestic violence.

Men are typically reluctant to report an abusive relationship because they are afraid of embarrassment or disbelief. Society has built this “macho” stereotype for men to mirror. If unable to meet those expectations they may be perceived as weak, cowardly or unstable. Women inflicting violence on a man is difficult for people to grasp. A true number of male victims are unknown because of their reluctance to verbalize fear of any kind.

Physical abuse is typically much greater when a man is the abuser of a woman but that does not mean a woman cannot inflict violence on a man. Unfortunately in some cases, the physical abuse leads to a fatality. Statistics show that on average more than three women and one man are murdered by their intimate partners in this country every day.

Emotional abuse can demolish a man’s self worth, leaving him feeling unable to live up to society’s expectations of a “man”. Repeated emotional and psychological abuse can weaken one’s confidence. It is hard to repair the belief of worthlessness if it has gone on for a long time. It is a main reason why people stay in abusive relationships.

Ending domestic violence does not stop with women.  Much encouragement should be given to men to report relationship abuse. Domestic violence should not be ignored no matter who the victim is.

Hubbard House offers shelter for women, children and men who need help. If you or someone you know is in an abusive relationship please call the Hubbard House domestic violence hotline at 904-354-3114 or 1-800-500-1119.

July not only marks the month of America’s birthday, but it also holds the title of National Make a Difference to Children Month.  While we are celebrating and coming together with our families, it is very important to realize that not every child is fortunate enough to have a fun, healthy and safe environment in which to live their lives. In fact, it is estimated that every year, over 3 million children are victims of violence, and that is only what is reported.

Children are special beings, full of imagination and spark that absorb notions about life from the world around them.  Because the future of America lies in their hands, it is extremely important, this month especially, that we put a strong focus on this issue. Violence against children can involve both physical and psychological abuse, but can also be experienced in the form of neglect, exploitation and sexual abuse.  Moreover, the effects of growing up in a violent home, as opposed to being directly abused themselves, can also have an equally devastating effect on a child’s psychological and behavioral well-being.

Fortunately, by working together, we can all help end this cycle of violence by recognizing and preventing child abuse. It is important to remember that some signs of child abuse are more subtle than others; it’s more than just broken bones and bruises. Warning signs include:

The key to ending violence against children is knowledge and prevention. Together we can make a difference.  So let the month of July, when schools are out, and the weather is nice, be a reminder to you to keep our children as safe as we can.  Keeping quiet about an issue is never the answer, and one should never feel as if they have nowhere to turn.